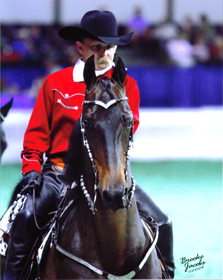 David has been Chairman, Chief Executive Officer, President and Founder of several design and manufacturing firms. He has been nominated and received Entrepreneur of the Year Awards for Boulder County, Colorado, as well as business awards of distinction for products and service. David has won many classic cross-country skiing races, starting as far back as 1992, and completed two Grand Canyon runs in under 5 hours, as well as trans Continental Divide runs. His love has been for animals and wildlife as Past President of Greenwood Wildlife Rehabilitation Sanctuary in Longmont, Colorado and as co-founder of the Wildlife Legacy Trust Fund Serving the Community Foundation of Boulder County, Colorado. He holds BS and MS degrees in biology and the sciences. His love for horses has taken him to many blue ribbons in Western Country Pleasure with several of his American Saddlebred horses. David is a First Degree Black Belt in Shao-Lin Kung Fu and a graduate of Cooking School of the Rockies Professional Culinary Program.